Drug reconstitution is a practice of mixing dried or concentrated form of medicine with sterile liquid to be injected to the patient at the site of care. Often sterile water or 0.9% solution is added to the container with powered drugs and then the resulting solution is drawn with a syringe and applied directly to the patient or mixed with a saline solution container to be dripped in to the patient. 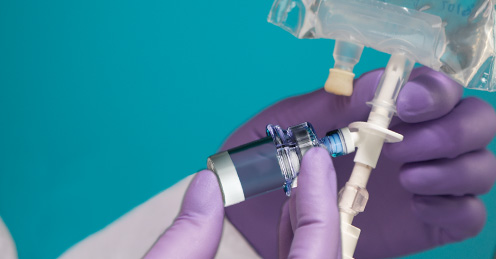 The reason why the powered form of the drug is needed is the potency. Often when the drug is reconstituted, there is a limited time the drug can be administered before the drug starts to lose the overall potency. For some antibiotics, the drug loses the potency enough where it is not recommended for use on patient, after 8 hours after the reconstitution. This leaves a small window for the drug to be mixed and administered.

If sterile solution is readily available, the problem doesn’t exist as the usage of drug is as simple as injecting the vial containing the dry form of drug with sterile solution, then drawing it back out to administer. However, for a remote area where potable water is difficult to obtain, sterile water is often impossible to obtain. Maji line of products can be modified so that the dried form of the drug can directly connect to the IV saline solution bag so that it can be mixed in the bag and administered directly using the drip system.

This could be a game changer, especially where shipping water is difficult at best, and sometime impossible due to the transportation and related costs.

IV bags contain medicine or fluids that need to be infused directly into the vein of patients. The top three manufacturers of IV solutions are Baxter, B. Braun and Hospira. Although many different types of medicine can be shipped within an IV bag, the vast majority of the bags contain sodium chloride (0.9% solution), sucrose (5% and 10%) and potassium chloride (various %). Usage of these solutions is called IV therapy. IV therapy may be used to correct electrolyte imbalances, to deliver medications, for blood transfusion or as fluid replacement to correct, for example, dehydration. The dehydration part is significant because for some diseases, such as Cholera, the first line of defense to cure the disease is using sodium chloride IV solutions.

IV solutions market will hit over $6.5 billion in 2014 with annual growth of over 8%. Even without recent saline IV solution shortage, the IV solution is very under utilized around the world, specially the third world countries. As an example, the most of the IV solution products are being used in the developed country, with US leading with 51% of all worldwide consumption. With places like Asia, with over 10x the population of the US, is only utilizing 1/4 of the worldwide consumption. There is dire need for IV solutions around the world and hopefully we can fill those needs. During the 1970s, the bulky and dangerous glass bottles were replaced with plastic type bags, which reduced some weight of the solutions. Here is a complete history of IV therapy, according to Workplace Nurses, LLC. 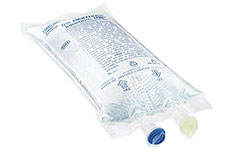 I. Origin of Intravenous Injection

4. 1665 – A dying animal was successfully transfused with the blood of another.

5. 1667 – A Parisian 15 year old boy was first successful human transfused with the blood of a lamb. Led to many problems and death. 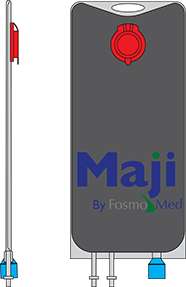 4. Pyogens introduced in the solutions were a problem.

5. 1940 – A nurse was assigned as I.V. Therapist at Mass General Hospital, prerequisite to perform venipuncture successfully.

1. Metal needle was used prior to World War II.

2. 1945 – Development of plastic catheter due to frequency of infiltrations.

Fosmo Med is pioneering the use of Forward Osmosis (FO) technology to make IV bags much less expensive to ship, easier to store and more convenient for on-site use.

FO works like this: If you put a membrane between water and any type of salt, the salt will create a draw that will move water through the membrane. This process requires no power, as opposed to Reverse Osmosis (RO), which uses power to cleanse water containing salts and other solids. The FO process leaves water with salt in its content. The salt in this case could be sodium chloride, sugar, potassium chloride, magnesium or others. This lends itself beautifully to IV solutions, since most of these solutions require salt of some type to be injected into veins.